VANCOUVER, B.C. - November 15, 2017 -Peter Armstrong, Founder and Chief Executive Officer of Armstrong Group, the owner and operator of Rocky Mountaineer, will be inducted into the Business Laureates of British Columbia Hall of Fame.

The Business Laureates of British Columbia Hall of Fame was created by Junior Achievement British Columbia in 2005 to honour outstanding B.C. business leaders whose efforts have shaped the province and country. The Hall of Fame showcases the positive impact the Laureates have had, through their vision, leadership, integrity and legacy, to inspire B.C.’s youth.

“Peter is a gifted leader, generous citizen, and thoughtful friend who dreams big and works tirelessly to bring those dreams into reality. He grew a small, struggling train company into a best-in-class tourism experience that continues to be listed among the top travel experiences in the world,” said John Furlong, Chairman, Rocky Mountaineer. “He has a generous spirit of contribution for those he works with, but also to the community as a whole. There has hardly been a major tourism-building event in Vancouver over the past 30 years that he wasn’t involved in. The city – and country as a whole – is better thanks to his leadership. On behalf of everyone at Rocky Mountaineer, we congratulate Peter on his induction into the Business Laureates of British Columbia Hall of Fame.”

Since establishing Rocky Mountaineer in 1990, Mr. Armstrong has evolved the business from a small enterprise into a world-leading tourism experience. To date, Rocky Mountaineer has welcomed more than two million guests from around the world to travel through the Canadian Rockies onboard its luxury trains. The company has received numerous travel and tourism awards, and several business awards, including being named among Canada’s Best Managed Companies by Deloitte (2014-2017); Canada’s Top Small & Medium Employers (2015-2017) by Media Corp; and Business of the Year (2015) and Employer of the Year (2013-2014) by Travel Industry Association of Canada.

“Peter is a true entrepreneur, a highly successful business person, and a dedicated community builder,” said Vancouver businessman Jim Pattison. “The tourism industry continues to be a very important segment of B.C.’s economy, and Peter’s leadership and contributions have a significant role in this. Peter is most worthy of this recognition.”

Mr. Armstrong joins a prestigious group of more than 60 business leaders who have been inducted into the Business Laureates of British Columbia Hall of Fame. The induction ceremony will be held on March 8, 2018 in Vancouver.

“This is an incredible honour to be recognized among some of the greatest business minds in British Columbia’s history. My accomplishments in business have been driven by teamwork, and this is a testament to the accomplished, motivated and relentless colleagues and mentors I have had the privilege of working with over the past three decades,” explained Mr. Armstrong.

Mr. Armstrong has served on several tourism industry, community and public company boards. Currently, he serves as a Trustee of the Vancouver Police Foundation and on the Board of P3 Canada. He has been involved in numerous notable initiatives that contributed to the growth of B.C.’s tourism industry, including Expo 86, the 2010 Olympic and Paralympic Winter Games, the expansion of the Vancouver Convention Centre, and moving the Canadian Tourism Commission from Ottawa to Vancouver. He has been inducted into the Canadian Tourism Hall of Fame and the Canadian Railway Hall of Fame. He has received an Honourary Doctorate of Laws from the Justice Institute of British Columbia (2012), an Honourary Doctor of Technology from BCIT (2007), and a Doctor of Laws from Thompson Rivers University (2007). In 2013, he received the Queen’s Diamond Jubilee Medal.

Rocky Mountaineer is the world’s largest privately owned luxury tourist train and, since 1990, has welcomed more than two million guests to inhale the mountain air and let nature take their breath away. Guests can choose from four unique rail routes that travel through iconic destinations such as Seattle, WA, Vancouver, B.C., and the majestic Canadian Rockies in Alberta. The unparalleled experience onboard the all domed fleet offers rich, historic storytelling, world-class cuisine, and a first-hand look at the vast, untouched beauty of Western Canada and the Pacific Northwest. Rocky Mountaineer is considered one of the best ways to see the Rocky Mountains, having received numerous international awards and accolades for service excellence. These honours include eight World Travel Awards for “World’s Leading Travel Experience By Train” and “World’s Leading Luxury Train,” and being listed as one of the world’s “Dream Trips” by Travel + Leisure magazine. 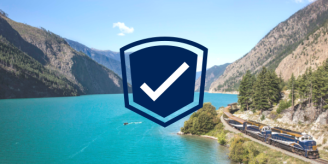